Hearing of my interest in classical reception in youth culture, the son of a friend put me on to Sekkou Boys, one of Japanese anime’s more interesting offerings.

In Sekkou Boys, Miki Ishimoto, an art school graduate who loathed having to copy from classical busts, takes a job at Holbein entertainment to get away from the art world. Imagine her dismay when she is assigned to manage a boy band, the Sekkou Boys, a group of gypsum art busts trying to make it in the music industry.

Miki’s job is to push them on a cart from gig to gig, or to drive their minivan. A large part of Sekkou Boys revolves around the knotty problem of just how a classical bust would get around.

The Sekkou boys, Mars, Hermes, St George and Medici, have different personalities, and get into adventures, trouble, or sulks, while Miki watches on helplessly.

My favourite episode so far is when Hermes moonlights running a pyramid scheme selling ‘Trismegistus,’ a miracle cure. But I’m also very much taken by the one in which Mars, the brooding type, scores a role in a movie, only to discover that his role is to be thrown at someone.

And Sekkou Boys is reception at its most arcane. What is being transmitted? What is being received? There are many layers of jokes and ironies, from the in-jokes about art school, to the very practical problem of how a group of busts in a boy band would get from place to place. In each episode, too, sly jokes play on the characters of the busts, both classical and modern. Holbein, it turns out, is a major art supply company in Japan: the whole show is an elaborate promotional campaign for its products.

In its aesthetics, Sekkou Boys draws on Vapour Wave, a form of online mashup in which elements such as the Apollo Belvedere are combined with electronic music, sunsets, and iconography of early Mac and Intel computers. 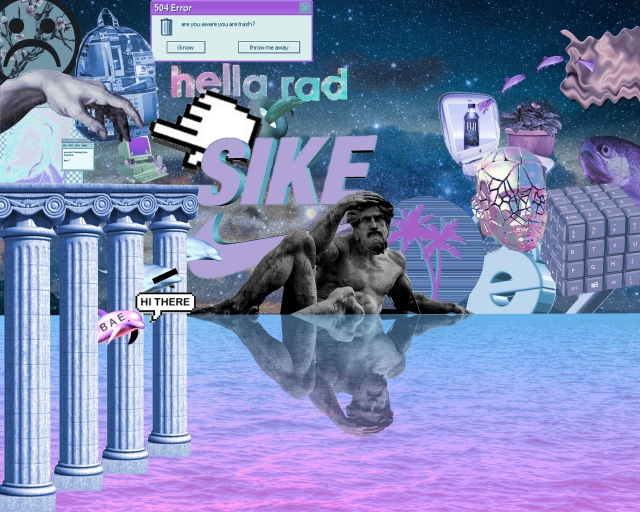 There’s a lightness, a frothiness, and a humour to this reception. If reception elements register, all the better; if they don’t, it at least looks good. Not since the Monkees has the Boy Band phenomenon been so beautifully sent up.

One thought on “Sekkou Boys and Vapour Wave”