Imagine a 13th-century castle stuffed to the brim with children’s books. With a swan named Ludwig guarding the moat outside, and swallows nesting in the entryway.

Imagine spending time in a serenely orderly reading room, surrounded by the best scholarship in children’s literature, and selecting picture books, pop-up books, novels, collections, and more from the hundreds of thousands of texts in the catalogue to the point that you can hardly see over the piles that arrive on your desk. 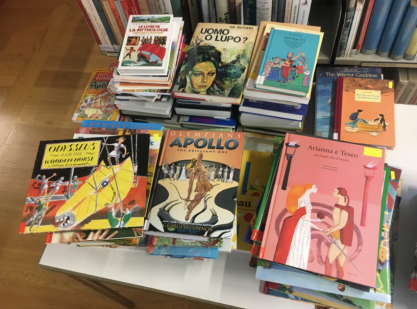 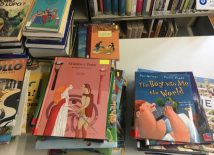 This was my happy lot in the past two weeks. I pored through the catalogue and, thanks to the help of the wonderful librarians in the lesesaal (reading room), found book after book after book that will play a part in the Our Mythical Survey, and form part of the Guide I’m writing with Miriam Riverlea.

I found myself enchanted and distracted and led in all sorts of directions, from the aesthetic to the narrative. But I held firm, and did my best to gather some exquisite works for inclusion and discussion. Here’s three wow moments from many!

My first wow moment was opening ‘Le Fil D’Ariane,’ by Dominique Feraud, which retells the story of Theseus, the Minotaur, and Ariadne’s Golden Thread. Its subtitle reads: ‘ou jouer le jeu pour vivre le mythe’ (1994). (Ariadne’s Thread: or, play the game to live the myth, but it sounds better in French!)

Game of the mythical goose

As you read, or listen, you can play along on a games board that is included with the book: the Game of the Goose (one of Europe’s oldest boardgames, and worthy of much further exploration). The idea of a book that is a game isn’t new, but such a beautiful experience reveals that picture books are an aesthetic experience, and also that reading and play can be intimately intertwined.

My second wow moment was opening two more boxes. These ones contained Ulisses, la Maga Circe e le Sirene by Lucia Scuderi, and Teseo e Arianna by Nicoletta Ceccoli, published by Italian company Fatatrac. These are a series called ‘carte in tavola,’ where the words are on one side of a card, and the picture is on the other side. As you read, you then put the card on the table, picture side up, to build up a snaking rectangle that forms a larger picture. Something about playing with the story as you read it, tell it, or hear it, is quite profound. It reminds me a little of the Japanese Kamishabai approach to storytelling. (I’ll be talking about these lovely works in Warsaw in a couple of weeks.) 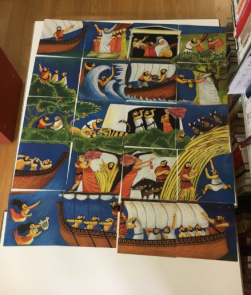 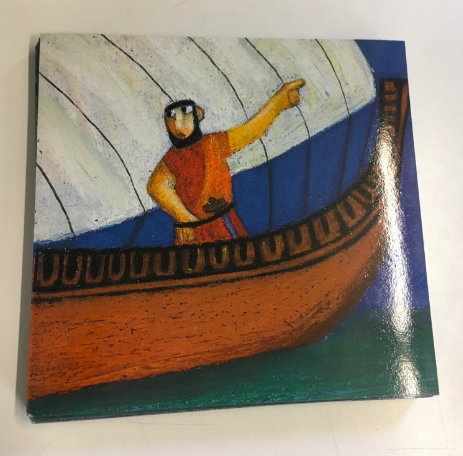 Odysseus sets out, in Lucia Scuderi’s beautiful set for Carte in Tavola

My third and biggest wow was to find that the excellent staff of the IJB had prepared a superb exhibition on the subject of insects:  Summende Staatenbauer und Pikende Plagegeister: Insekten und Spinnentiere in Kinder- und Jugend Büchern, a title that almost defeated my high school German, but with a little help from the web, basically translates as Buzzing Builders and Piercing Pests: Insects and Spinning animals in Children’s and Young Adults’ Literature.

Arachne’s web of words and meaning

Some of the many many books on insects . . . to see more visit the castle!

I was led up the stairs to the exhibition room where I discovered not only that they had illuminated the mythological elements of insect-related storytelling (La Fontaine, Aesop, Toni Morrison), but that they had displayed a whole host of children’s books, from all over the world, devoted to understanding and sharing the lives of insects.

So here’s a shout-out to this wonderful exhibition, and a hearty recommendation for anyone passing through, well, anywhere, to take a detour to Munich and the joys of Schloss Blutenburg and the Internationale Jugendsbibliotek.