In mid-July, Liz Hale and I travelled to New Zealand, to attend and present at the biannual ACLAR (Australasian Children’s Literature Association for Research) conference at Victoria University of Wellington (VUW).  With Babette Puetz (Classics, VUW), we talked about classical reception in children’s literature. I spoke about Joan Holub and Suzanne Williams’s American Goddess Girl series; Babette spoke about Zeustian Logic, by New Zealand author Sabrina Malcolm; and Liz gave the ACLAR delegates a tour of the Our Mythical Childhood Survey.  The theme of the conference was ‘Houses of Learning,’ a topic that brought to light many rich texts and approaches.

We also had the opportunity to spend a couple of days researching in the Dorothy Neal White Collection of Children’s Literature at Te Puna, the National Library, of New Zealand, where we examined an array of children’s texts that engage with the classical world.

It was especially exciting to view texts by local New Zealand writers, including Ken Catran, author of the historical novels The Golden Prince (1999), Voyage with Jason (2000), and Odysseus (2005).  It was also fascinating to see how some of the Greek myths had been rendered as readers for New Zealand school children, another area of reception that is often under-represented.  Downstairs from the reading room, we joined a group making Maori masks, based on Cliff Whiting’s creation myth mural, ‘Te wehenga o Rangi rāua ko Papa.’ 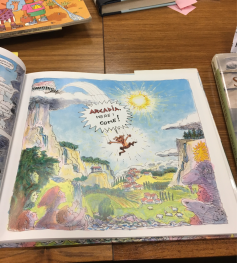 I am Pan, by Mordecai Gerstein

King Midas and other Tales, by Lisl Weil

The Weaving Contest, by Wright and Jahnke

Classics and Kiwi Culture–Intersections and Invasions

My involvement in the Our Mythical Childhood project has heightened my awareness of the ways in which ancient myth invades our contemporary world, and on this trip I was particularly curious to see ways that classical and Kiwi culture intersect. One of the most explicit examples of their convergence is in the work of the lithographer Marian Maguire, who juxtaposes the iconography of Ancient Greek vase paintings with New Zealand’s colonial past, and with indigenous mythology. In one piece, Ajax and Achilles play dice at Milford Sound; in another, Captain Cook arrives on his boat bearing an ancient Greek vase. And in another still, Odysseus clings to the remnants of his raft, about to be blasted by the Maori god of the sea, Tangaroa.

I was fortunate to have the chance to see the collection of Maguire’s works displayed at the Classics Department at VUW and was struck by their clarity and precision. I was also struck by the remarkable way her work explores the resonance of the stories and artistic traditions of ancient Greece within another culture on the opposite side of the world. Although her work isn’t intended for children, it has important implications for the research questions at the heart of the OMC project, and I’m eager to read Maguire’s chapter in the recently published collection Athens to Aotearoa: Greece and Rome in New Zealand Literature and Society (2017), edited by Diana Burton, Jeff Tatum and Simon Perris of VUW’s Classics Department.

One lunchtime I visited Te Papa, the Museum of New Zealand, where I encountered Age of Fishes (1980), by Auckland artist Richard Killeen. It’s an arrangement of large silhouetted shapes hung on a white wall, in shades of blue, yellow, brown and black. While some of the cut-outs are recognisable as marine creatures, others are more abstract, and to my mind, some of them resemble the silhouettes of archaic pottery vessels.

Age of Fishes, by Richard Killeen

Welcome to the Pacific, by Richard Killeen

Another of Killeen’s works, Welcome to the South Pacific (1979) happened to be on display in the VUW Council Chamber, where the ACLAR conference was held, and I enjoyed the interplay of the different elements, while also reflecting on the notion that I was beginning to recognise classical motifs even in the most abstract of shapes.

Perhaps it was a simply a case of frequency illusion, a form of cognitive bias in which we register a concept and immediately begin to observe it everywhere. (Colloquially, the phenomenon is known as the Baader-Meinhof phenomenon, after the West German militant group). On one city street, Pandora’s jewellery shop was located next to an interior design firm called Attica. And I noticed winged figures everywhere, not only at the library in Gerald McDermott’s retelling of the Icarus myth, Sun Flight (1980), but also on Te Papa’s colourful windows, and even on the hoodie of the man who made our morning coffee.

Back at home in Australia, I am still reflecting on how to make sense of these encounters, profound and frivolous.  The classical past is a rich depository of images, narratives, and motifs that the modern world continues to draw upon. My week in Wellington revealed that it is not merely within the pages of texts that ancient stories endure, but everywhere I look. I feel very fortunate to be taking part in the Our Mythical Childhood project, as it seeks to understand the myriad, diverse, and often surprising ways that the classical past infiltrates contemporary children’s culture.

–Miriam Riverlea, PhD Monash, is collaborating with Liz Hale on Classical Antiquity in Children’s Literature: An Alphabetical Odyssey.  It will be a guide to the field, taking into account issues of reception, children’s culture, and more.  Miriam’s PhD, My First Book of Greek Myths: Retelling Ancient Myths to Modern Children, can be read here.

One thought on “Our Mythical Week in Wellington”