When I was a child I was bitten very hard on the finger by a pet-shop cockatoo called Cocky.  Perhaps if he’d been called Caesar our encounter would have been more civilised.  We change pace this week with a lovely piece from Anne Rogerson (Charles Tesoriero Senior Lecturer in Latin at Sydney University) about the curious habit of calling cockatoos Caesar, and their import in iconic Australian children’s books.

I can’t remember whom I encountered first as a child – the engaging young Norah of Billabong or Julius Caesar. I think that it was probably Norah. I was certainly reading Mary Grant Bruce’s stories about life on a Victorian cattle station, and then abroad in England and Ireland during WWI, while still in primary school, long before I had anything but the haziest knowledge of Roman history.

At first glance, it may not seem that this popular and determinedly Australian series of young adult novels has much to do with the Classics. Its heroes and heroines are hard-working, horse-riding, cheerful and clean-cut young people, who – though well-educated – aren’t given to dwelling on academic matters and are rarely seen to read a book. But it was while re-reading the series recently that I realized that a little snippet of Roman history had been hiding in plain sight in the early chapters of the first Billabong novel all along.

A Little Bush Maid (1910) introduces Norah, her father, her brother Jim and his school friends, and the “menagerie” of Norah and Jim’s pets. These are many and various, including a wide variety of native and introduced species, an aviary full of unnamed birds, a parrot called Fudge and – last but most certainly not least – “old Caesar, a very fine white cockatoo”. Only Caesar gets a naming story. He was shot while very young and rescued by Norah, who brought him home and handed him to her brother, whom he promptly bit:

“Jim was no hero – at the age of eleven, he dropped the cockatoo like a hot coal. “Great Caesar!” he exclaimed, sucking his thumb, and Caesar he was christened in that moment.”

As one might expect from such an introduction, Caesar’s story is characterized by aggression, particularly towards other animals and visitors to the homestead. He exists in a state of deepest enmity with the housekeeper’s cat, and their relationship is one of battles, strategic plotting and occasionally (for the warlike but chained Caesar rarely wins these fights) a “wild state of triumph” on the part of the victorious bird.

Thinking about the bellicose cockatoo of A Little Bush Maid set me wondering about the subliminal effects of his Roman name on the impressionable young reader that I was in the 1980s when I began to read the Billabong books. I didn’t know any boys for whom “Great Caesar!” was a customary exclamation, and I hadn’t yet come across the Superman comics, where “Great Caesar’s ghost!” is a catch-phrase of Perry White, the editor-in-chief of the Daily Planet. Nor had I read any Mark Twain, where the once-popular oath is also recorded, or encountered the comic strip by A. E. Hayward titled “Great Caesar’s Ghost” and published in the New York Herald in the mid-1910s. For me, Jim’s “Great Caesar!” was simply something to take at face value, and the cockatoo’s name likewise. 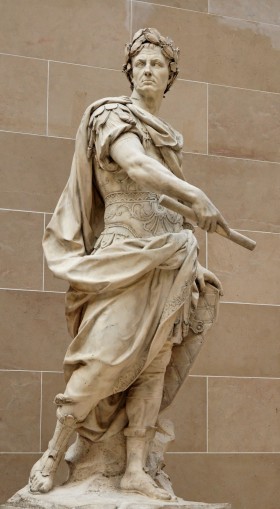 Julius Caesar (not a cockatoo) 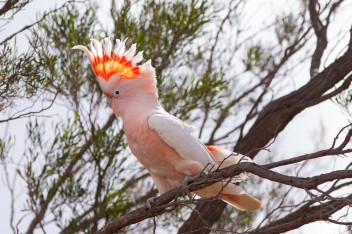 It was much more recently that I learned that Caesar is a popular name for cockatoos, along with Napoleon, Alexander, Angel Baby and Houdini (Mattie Sue Athan, Guide to Companion Parrot Behaviour, 2nd edition (2010), p. 194). Cockatoo Caesars appear in the Wall Street Journal (“Polly Want a Xanax? Neurotic Parrots Can Drive Their Owners Crazy”), and the Journal of the International Association of Animal Behaviour Consultants (a good news story about a nervous and neglected cockatoo called Charlie who was rehabilitated and renamed Caesar to mark his happier new self). They also inhabit a corner of their own on the internet. There are those whose percussion performances on saucepan lids, coffee tins and salt and pepper shakers are immortalized on YouTube, one who does a head banging dance to the strains of Little Richard’s ‘Tutti Frutti’, and another who mimics her owner’s typing on the computer keyboard (female cockatoos are called Caesar too). Others are not so outgoing – one poor Caesar appears as the terrorized victim of persistent bullying by a companion cockatoo called Carmen. But whatever their accomplishments or state of mind, it is a curious fact that from Australia to the United States of America, from 1910 to 2018, if you meet a pet cockatoo the chances are reasonably good that it will be called Caesar.

Is this anything more than a curiosity? Maybe not, but it is still perhaps worth thinking about the Classical names casually dropped into our lives, and our children’s literature, as the names of our pets. They are intended to reflect on the character of the animals so called, and it is no surprise that confident and cocky birds like cockatoos are graced so often with the name of Caesar. But they also tell us something about popular perceptions of the ancient figures they (if very distantly at times) recall. And in turn they have a small part in shaping our own impressions of the historical characters whom we later learn so much more about. Somewhere still in the back of my mind, whenever I read Caesar’s commentaries today, Norah’s pet bobs up and down on his perch, “a giant among cockatoos, [who] had a full sense of his own importance.”