Anna Mik is an expert in chasing mythical beasts, and has discovered two curious ones for our Saturnalian summer.  One appears in a picture book, Pandora and the other in a hit Broadway musical, Hadestown.  Anna  is a PhD student at the University of Warsaw  Faculty of Artes Liberales, and a research assistant in the Our Mythical Childhood project.  Her PhD topic is The Mythical Other: the Study of the Animal in  Children’s Reception Culture.  Read on, to find the mythical beasts at the heart of these beautiful texts.

Watch out for the beast!

This year I have started to work more with classical culture – it came rather naturally as I also have started the work in “Our Mythical Childhood” project. Many cultural texts came to me – or came back – and gave me the opportunity to look at them in a new, often unexpected way.

The main approach in my research is that of animal studies, as I try to track all the mythical creatures that have been lost in the contemporary world. One that I have found recently was wearing a disguise not easy to unravel. The other one – was not even an animal in the literal way. Both of them I would like to evoke for this year Saturnalia on Antipodean Odyssey – as I’m sure it’s a safe space for all creatures.

My first text is a discovery of the year 2017 – a picture book Pandora  by Victoria Turnbull. She tells a story about the lonely vixen – the Pandora of the title – who lives “in a land of broken things.” In her world, seemingly a wasteland with no life in it, everyday she tries to “keep swimming” and organises her time by fixing all the things that has been destroyed. In one scene she sews a teddy bear together, which might be a symbolic way to show her deep longing for  company. Suddenly her dream comes true – a blue bird with a broken wing appears in her world. It too needs fixing – and Pandora is very good at it. They develop an unique connection. 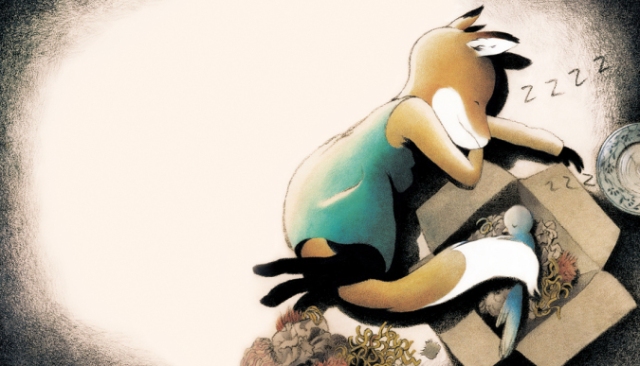 As the bird gets better and starts to fly, it brings Pandora something in return – seeds and pieces of plants from far-away lands. Everything seems to be perfect – until one day the bird does not come back. Pandora gets depressed and all hope is lost from her world. But not for long. The seeds and plants that the blue bird previously brought, now begin to grow, bringing back life in the land of broken things. At the end Pandora even hears the song sang by her friend. Hope grew slowly, but has never been truly lost.

The beast of Hadestown

The second beast that I would like to call in is America presented in Anaïs Mitchell’s album (that then expanded to a musical project) Hadestown (2010). Each song is sung by different characters (Hades, Persephone, Orpheus, Eurydice, Hermes, Fates, etc.) that corresponds with each other in telling a not yet complete story (that is presented in the musical based on this album).

The album of Hadestown — Orpheus and Eurydice in TrumpAmerica???

Ruled by Hades and Persephone, fought by love of Orpheus and Eurydice, the world of consumerism and destruction is a rather sad diagnosis of the contemporary reality of the United States and the American Dream.

The story starts with a rather happy event – a planning of the wedding of probably the  most tragic couple in Greek Mythology – Orpheus and Eurydice (click here to hear the song). The girl decides to go to Hadestown – a land of prosperity and work opportunities, since Orpheus and his music are not enough to provide for both of them. Her decision is necessary, but tragic – the work that she will be forced to do is never-ending in Hadestown.

Just like Sisyphus, everyone there is not truly happy, but at the same time realises that this is the best they can get – poverty is much, much worse. The song “Why We Build the Wall” sung by Hades now has a new meaning. Back in 2010 it was simply a symbolic phrase describing the necessity of separation of poor and rich. After the presidential election in 2016 in the USA the song gained a new meaning, and president Donald Trump appears to be a modern Hades. His Hadestown (Trumptown?) called America, is a mythical beast, that certainly must be tamed.

Those two examples of a modern mythical menagerie are not obvious. They are not like sirens or centaurs that we can directly relate to the classical tradition. But with much appreciation for reception studies, this is what can re-read in the texts using classical tools, discovering that antiquity is the world that we still live in.

Saturnalia stretches on.  This time, we have the discovery made by Hanna Pauloskaya.  Hanna is a scholar of Neo-Latin and Reception studies, and a key player in the University of Warsaw team that leads the Our Mythical Childhood project.   Her current interest is the presence of antiquity in children’s culture of the Soviet Union, paying special attention to animation and cinema for children in communist cultures.  Hanna’s discovery is a 1986 Soviet musical film about the Argonauts, inspired by the adventures of the British explorer Tim Severin, who retraced a number of epic sea voyages, mythical and real, including the voyage of the Argonauts.   Hanna’s discovery is an extraordinary salad of influence, exploration, creativity, and more, and has given the title to her blog about her current research on Soviet children’s animation.  Enjoy!  –Elizabeth Hale.

The Argonauts or Merry Chronicle of a Dangerous Voyage

The first time I watched this movie was while posing as a model for a sculpture my husband was making. So I could only see the picture for 3 minutes every 10 minutes, turning round all the time. The movie itself is also not so conventional and it didn’t make the process of understanding easier. It was a kind of mess of a plot seasoned with nice music, after the first time I ‘watched’ it. I really liked it after the third time and further on.

The movie is called ‘The Argonauts or Merry Chronicle of a Dangerous Voyage.’ The director is Eugene Ginzburg. It was made in 1986 in Moscow (the Ekran Studio) and Tbilisi (the Georgia Film).  It is a musical, or rather a ‘revue’ as it was called officially then. The greater part of it is made by Vocal-Music Instrumental-Ensemble ‘Iveria.’ ( Sergei Zhuk has written a wonderful book about the story behind the ensembles and rock-n-roll and rock in the Soviet Union: Rock and Roll in the Rocket City!) 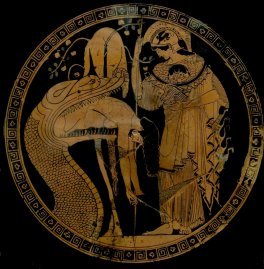 So here they are — this music, these dances, young Georgian and Russian actors playing Greek heroes, Georgian wine and dances. In the beginning they say they will tell ‘their own’ story of the Argonauts, their vision of why did the Greeks sail to the end of the world.

The inspiration for the movie was an expedition of Tim Severin who, aiming to reconstruct the voyage of Jason, reached the shores of Georgia in 1984. So, two years later we have the movie that starts with documentary shots of the British explorer and his team. The Soviet Argonauts have also reconstructed the ship, and they filmed landscapes of Georgia and Armenia, giving their version of the myths. The whole trip looks like a journey of young men on vacations, happy to have adventures and mighty to overcome them. It seems that the actors also had a great time while filming the movie. Now, regarding this time 30 years ago, they say:

‘A small Georgian town of Poti, where the main shooting took place, was remembered for a long time by everybody. For two days the crew could not start the work. Summer, sun and Georgian feasts ruined all the plans.’

And who knows, perhaps, the Soviet young crew was right and the journey really looked like this—happy, joyful, merry, a bit drunk, where the biggest danger was a stone falling in the mountains and Medea was a beautiful, young, chaste girl, completely in love with a handsome stranger, looking like a son of a king.