“Who would think that such a disaster could be started by something as small as an apple? Yet it could have been just one of those instances where small things can lead to larger things.  Take the right circumstances, the right events, and the right kind of people, and a carefully line of dominoes can be knocked over with just a flick of the finger . . .” Ash Hulme– ‘Troy’

One of the best things about the Our Mythical Childhood project is discovering the incredible creativity that exists in the community.  I think of it as home-made classics.

When I was in Dunedin last year, I met Ash Hulme, who showed me “Troy,” the graphic novel she has been working on.  It’s a space opera version of the Iliad, and I was blown away by its clarity and inventiveness.  I’ve asked Ash if I can share some pages from it, and included a short written interview with her.  — Elizabeth Hale.

It may be a cliché, but I think it is in my genes to be drawn to stories and storytelling. I can’t remember a time when I wasn’t. I’m a huge fan of many (what we might call) modern “myths” – Star Trek, Star Wars, Game of Thrones, and other such incredibly complex creations that have wormed their way into our consciousness, becoming almost independent of their original settings or creators.

What has always amazed me, and perhaps even drew me to the Classical myths to begin with, is how incredibly complex and “alive” they seem, even without an identifiable author (in the sense that we know that George Lucas is primarily responsible for Star Wars). Who created these things? The answer is (simultaneously) nobody, and everybody, and that to me is fascinating. At the same time, the much simpler and probably more powerful attraction is that these are genuinely ripping tales.

If I had to point to a singular reason why younger audiences connect so readily with the Classical period, this would have to be it. Children and young adults love the Greek myths for the same reason that such authors as Paul Jennings and Roald Dahl (and modern tales like Captain Underpants) are as popular as they are: because young people are naturally drawn to the absurd, unsettling, amusing, and even mildly gross. The idea of a man chopping up his nephews and feeding them to his brother would horrify us were it to happen in reality. But we are also fixated and titillated for the same reason that we so enjoy tales of “true crime”, and this is equally if not especially true of kids. They’re dark little beings – which is something that most popular children’s authors understand only too well.

The most surprising thing (to me) about my graphic novel, Troy, is how easy it was to adapt to a space opera setting. Possibly the only indicator that this isn’t taking place in the ancient Mediterranean is the art. Chariots are more like floating scooters; “ships” are spaceships; Olympus is a space station; and there may occasionally be a robot in the background. But the sci-fi elements haven’t really done much to change the essential script, and occasionally I even forget that this isn’t taking place in the original (ancient) setting. Still, this may be because so much speculative fiction is heavily based on the same mythic archetypes. 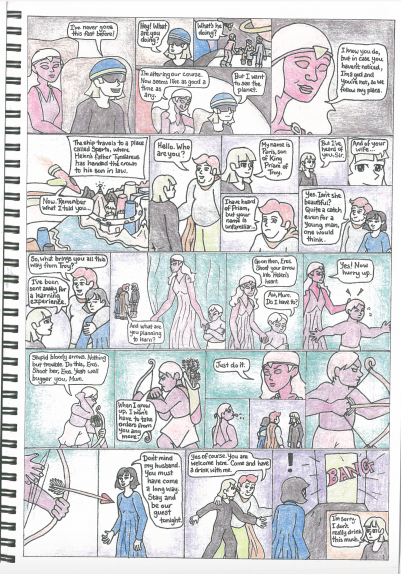 I had the plays of the Greek tragedians as source material, and Homer of course, but most of my research was to sit in the library for hours and copy out some sections from an encyclopaedia of classical myth (my apologies; I forget which one). My process for selecting material (which I may come to regret!) was to include everything that I could get my hands on to do with the Trojan War, while still retaining something close to a cohesive narrative. In particular, I made a note of anything that I thought was funny. This is important, I think, because any war narrative can get quite dark and violent, and there needs to be a lighter side to balance it out.

As for future projects, who knows? Most of my prose draws on the Classical tradition in some respect, but more in the sense of fantasy tropes, which do draw heavily from mythology. I have written a couple of fanfics, but nothing very serious. I guess it’s a question of “never say never”, except that I do want to continue working on Troy. The myths are nothing if not engaging. I always had an idea in my head that I would one day write a graphic novel, but I’m a novelist by inclination. I like art, although I can be a bit of a lazy artist, and none of my comic book ideas ever seemed to “stick” before I started on this one.

I honestly didn’t put much initial thought into how it would be received by others, not until my friends and family started to respond as well as they did. If anything, it was an outlet for my own obsession, when other people (especially my mother) got annoyed that I was talking about mythology all the time. That said, I probably wouldn’t have been able to stick with it as long as I have without other people’s positive responses. But my main purpose for engaging with this material is still largely because I enjoy the artistic process, and to find a way to express my interest without annoying the pants off everyone around me.

*Queries about Troy can be sent to antipodeanodyssey@gmail.com

Some of the best children’s products are those that entrance adults too, and I am not ashamed to say that I fell, hook line and sinker, for The Deep, an animated adventure series about a family of underwater explorers.

The Deep began life as a graphic novel, by Melbourne writer Tom Taylor and Brisbane artist James Brouwer, and published by Perth comics publisher, Gestalt.  It concerns the Nektons, a family of aquanauts who explore the oceans in their amazing submarine, the Arronax.  As they journey, they encounter mythical beasts and creatures, usually (but not always) finding a scientific explanation.  They also have some very cool gadgets, including the ‘knights,’ elaborate ‘extra-vehicular activity suits’ which enable them to do some serious discovery work.

At the heart of the story is the Nektons’ possible connection to a lost ancient civilisation, called Lemuria (similar to Atlantis). And in its adaptation for TV by an international collaboration between Australia and Canada, this story  runs delightfully through episodes.  It’s got it all, in fact: a good-hearted set of heroes, including the boy wonder, Antaeus (named for the son of Gaia and Poseidon) and his best friend Jeffrey, a tropical fish with a mysterious past; his sarcastic older sister Fontaine and her possible love-interest, the piratical Finn; and a pair of scientist parents, Will and Kaiko.
The name Nekton comes from a scientific term for the ‘aggregate of actively swimming aquatic organisms in a body of water.’  It turns out the Nekton family, who are all magnificent swimmers, are also descendants of the Lemurians. Together with some mysterious guardians, named after Greek and Roman sea gods (Tethys, Glaucus, Proteus), they search for the lost continent.  As they do, the find mysterious underwater temples, disappearing islands, ancient shipwrecks, and a curious labyrinth in which lurks a pair of seahorse-like Minotaurs.
As January slips away, this is our final Saturnalian surprise.  So where better to conclude than my  own favourite discovery from the first year of researching Our Mythical Childhood.  The Deep was a surprise to me because of its elegant interweaving of mythical and scientific matters, in a wholesome show for children that is engrossing for adult viewers too.  It’s also absolutely gorgeous to look at.

If you like underwater scenery, beautifully realised, with myth, monsters, and more, then take the time to watch The Deep.  There are 2 series already airing, with a third in the works, and I hope there’ll be many more . . .
— Elizabeth Hale