“Battling with incredulity isn’t easy. It’s not a battle Poseidon had to fight.”

Bunyip and Selkie, creatures of the waterways.  One from Australian Aboriginal mythology, one from Celtic lore.  One made up of scraps and patches of stories, and images.  The other a seal or a woman.  Mysterious, gentle sometimes, predatory others.  Or so we say (after all, what do humans really know about anything?)

Anna O’Faolan (Masters student, UNE and editor of The Lark Magazine) is inspired by both, and exploring in her Creative Practice Masters research project how they might come into contact.

“In 1876, following renewed Bunyip sightings in (South) Australia, the government of that state offered a 50 pound reward to anyone who could bring in one of those elusive, swamp dwelling creatures known as Bunyip”

This is the sentence that caught my imagination and set in motion the journey I now find myself on. For me as a child growing up in the Australian bush, spirits of the land were everywhere. Reflecting on the forms these energies have taken in my life, I am embarking on a journey to explore the influence of mythologies of the land on the Australian psyche.

Drawing in this case on the Indigenous Australian myth of the Bunyip and the Celtic Selkie myth , I am writing a novel in the historical fiction genre, created with young readers in mind. And I’m starting my journey with that opening line. Because right there, with the government promise of financial reward for scientific evidence of a mythical beast, where fact intersects with belief, where the unknown is safely still the unknown, that’s where the story got interesting.

‘Captured’ by the Popular Imagination

“The bunyip, a lurking presence in the depths of the billabong, is one of the most enduring and terrifying of Australian Aboriginal beliefs. Oral traditions, pictographs and ground-carvings testify to an age-old belief in a large, amphibious, man-eating creature; and ever since colonization, reports have emanated from equally terrified settlers telling of encounters with this Australian nightmare.”

Bunyips were not a formative presence in my childhood. A felted Bunyip did not slump on the end of my bed, nor sit too big for its chair sharing tiny cups of tea. And yet mention the word Bunyip and he immediately comes to mind. Not as a swamp dwelling fiend , but rather, as one of folklore’s ungainly misfits.

In my childhood dog-eared copy of the marvellous 1970’s children’s book The Bunyip of Berkley’s Creek, created by Jenny Wagner and Ron Brooks, Bunyip asks the question plaguing Bunyip identity at this point in time.

The quest for authenticity of self is played out wonderfully in this book, in which Bunyip attempts to find proof that he exists. That 20th century Bunyip struggles to feel accepted and connected reflects her battle with the now popular belief that she never actually existed. Battling with incredulity isn’t easy. It’s not a battle Poseidon had to fight. And despite the extensively documented Bunyip sightings by white settlers in the 1800’s, by the end of the century apprehension turns to mockery. As early as 1852, social commentator Godfrey Mundy wrote that:

“…Bunyip became, and remains, a Sydney synonyme for….‘pretender’, ‘humbug’ and the like. The black fellows…unaware..still continue to cherish the fabulous Bunyip in their shuddering imaginations.”

Post-Colonial Australia is keen to put as much distance as possible between itself and its troubled beginnings. Struggling with identity issues of its own, the mainstream adopts a cavalier stance in regard to anything which smacks of superstition. Moved on then, from her ancient home where she has long commanded respect towards a fragile tenancy as an affable spook in children books, Bunyip serves the purposes of an adult world Bunyip is an imposter in her own land.

In a literary sense the fate of Bunyip in the popular imagination epitomises post-colonial infantilisation of indigenous mythology. It is this ill-considered appropriation that has problematised post-colonial children’s literature, especially in those instances where literature attempts to tell cross cultural stories.

And so, I find myself drawn to these questions: Could I invite Bunyip back into a fictional historical landscape more befitting her majesty and respectful of her age? Might Bunyip be returned to her place as guardian of Australia’s inland waterways, a formidable elder with something to teach young readers? Or would such an invitation be just more of the same, yet another cultural appropriation? As yet these questions remain, for me, unanswered.

I do feel however, that re-introducing children to mythologies of the land, in this case Bunyip, provides (one of many) pathways for encounters with ancient Aboriginal culture. This is an area of understanding which must find new life in the school curriculum and contemporary conversation with young ones. And It’s not hard to welcome her back. Bunyip is complex, powerful and enigmatic, representing as many mythic creatures do, a multiplicity of identity. Bunyips, are often misunderstood. They are unusual to look at. They appear to live alone. Bunyips are idiosyncratic and odd.

And while Bunyip is found in most parts of the country, her physicality takes on the specific features of the land in her locale, that is , of ‘country.’ Her connection to place, shapes her appearance.

In this sense she can offer young readers an understanding of the diversity of human experience across this vast country, something well understood in Aboriginal cultures. In the South, she is a Diprotodon hunter. In the North a reptilian swamp bird. Deep in the bush she is haired and muddy, submerged in dark water, preying on errant children who wander off from campsites. And in the Great Lake region of Tasmania she is majestic, swift and fiercely maternal, like her Scottish cousin in that famous Loch. Plesiosaur. Sea dog. Seal.

And this brings us to the selkies (Celtic deities, that are human on land, and seals in the water). Because somehow in 19th century Australia , these two find themselves caught up in a case of mistaken identity. And that’s always a basis for a good story.

“As the beast crashed through the water it became the first recorded sighting of a Tasmanian Bunyip by a white man. The year was 1852, ..midnight on a moonlit lake at Lake Tiberias…”

Harvey J Taylor in The Tasmanian Bunyip- Alive and Well?

By 1870, there was a sense of urgency around solving the mystery of these repeated sightings, and the law became involved.

Chief Constable Sergeant James Wilson wrote to his superior on the matter, challenging the idea, popular at the time, that the creature seen in the Lake was indeed a seal having travelled upstream from Hobart’s Derwent River.

“..I do not think it possible for seals to make their way from the sea to The Great Lake, in consequence of a very considerable waterfall being in the Shannon, near its junction with the Ouse, unless being amphibious they could escape the fall and reach the river above by land.”  October 20, 1870.

I can see them now. Shedding their coats as they climb from the river. Padding around the Shannon on salty feet through deep wilderness. Making their way to the bottom of the falls and plunging back in to resume their travels upstream. To a place where it is quiet. A place where there are no more sealers, only fishermen.

Selkies have long been my favorite mythological creature. The fact that they turn up in Tasmania’s historical archives nurtures my desire to bring together two ancient storytelling cultures in this setting, one of first peoples, one of recent arrivals.

But what can the selkie myth offer young readers?

Selkies- A Celebration of Heritage 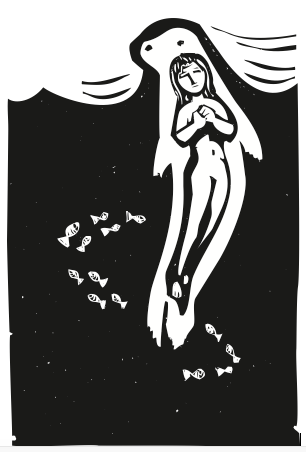 Selkie in the ocean By xunantunich @ Adobe Stock Images

Selkies offer connection to a cultural heritage many young Australian readers share, but which is not often celebrated. The devaluing of Irish culture has a long history, still evident today. Leprechauns can no doubt be found right next to the Bunyips in the souvenir shop. But the selkie seems to have found way around this and is generally revered. The Seal maiden pops her nose up from time to time in beloved children’s books and films such as The Secret of Roan Inish , The Song of the Sea, and a more conspicuously in the vast array of mermaid themed tales. Children in my experience adore these stories, ever enchanted by the idea of shapeshifting, of freedom of movement, of being weightless with luscious hair! But perhaps it is also the struggle of Selkie to be true to her nature that resonates.

Selkie and True Self

The Selkie myth represents the struggle to retain authentic self. Selkies are drawn to explore an aspect of their identity which involves both risk and reward, that is, the opportunity to become a creature with legs (for dancing). Yet in order to do this, they must shed the coat required for life under the sea. If the coat is stolen during this transitional time, they become trapped in this less desirable ‘other’ self/world.

When selves are trapped in temporary worlds, they pine for their homeland, a place in which they can rest easy. This, like the Buddhist philosophy of- ‘true face’, or ‘own face’, is a motif found in the mythologies of probably all cultures, and its one children struggle with in everyday life

As a teacher and mother of children under 12, I spend a lot of time with this age group. One of the most pressing concerns for children as they interact, is the sense that they have been misrepresented. That something wasn’t fair, that someone didn’t understand what they really meant, that there is no space in their world of parent, teacher, peer, societal influences, codes and rules to show their ‘true face’, their ‘own face’.

This conflict remains with us lifelong. Somehow we adults accept the loss of true self and get used to the masks, resigned to the idea that perhaps we might never really feel at home in our lives. But young people are inherently optimistic.

Authenticity of identity in these stories goes hand in hand with connection to place. Connected so deeply as Bunyip and Selkie are to place, they provide a productive link to the lessons of Eco literacy, allowing these concepts to be woven into stories for young readers. Because connection to place, means care for place.

Speaking at the Sydney Writer’s Festival in early May , Indigenous Australian author Tony Birch discussed the importance of giving kids a sense of what it feels like to have a place you care about taken away. I was inspired by his observations that for children emotional connection to place brings out a fierce guardianship of that place. And fierce guardianship, rather than rational policy making, is what will inform environmentally sustainable decision making by future generations.

Within Bunyip, our idiosyncratic, still and ancient creature who lurks long in comfortable solitude and our Selkie, darting across the oceans, buoyed by independence and a sense of clan, we find a polarity in energies circling around the shared motif of authenticity of identity. That they were once mistaken for the same creature sparks my curiosity, nay ignites the wild imagined idea that something beautiful could come from the union of ancient tribal stories. That in the convergence of Seal and Bunyip we might hope for the possibility that while human adults behaved unforgivably in so many early Australian encounters, stories told by the Ancients were able to meet, and merge without violence, to create something magical, curious and new in the world of Myth.